baptism During the ceremonies of Timkat, the Tabot, a model of the Ark of the Covenant, is reverently wrapped in rich cloth and borne in procession and carried through the crowd in every city on the head of a priest. The Tabot/s are carried only by the most senior priests of the community and completely covered because they are too sacred for anyone to gaze at them. Even the head of the Ethiopian Orthodox church is forbidden to see it; only its guardians can look at it. The actual Ark of the Covenant is said to be in the city of Aksum, guarded by monks who have vowed not to leave the chapel grounds until death. A special tent is set up where each Tabot rests as members of the church choirs chant hymns. This is accompanied by a special dance by the priests with their prayer sticks, and beating of drums, ringing of bells, and blowing of trumpets. The priests pray through out the night and mass is performed about 2:00 am the next day. Near dawn the people go to the water and attend the prayers. After the prayer, a senior priest uses a golden processional cross to bless the water and extinguishes a burning consecrated candle in the water. Then he sprinkles the water on the assembled congregation in commemoration of Christ’s baptism.  Many of the more fervent leap fully dressed into the water to renew their vows. 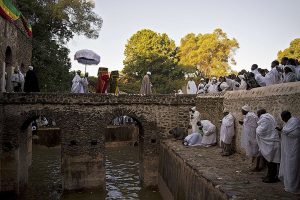 After the baptism, the Tabot’s of each church, except St. Michael’s church, start their way back to their respective churches. The elders march solemnly, accompanied by singing, leaping priests and young men, the beating of staffs and prayer sticks recalling the ancient rites of the Old Testament (11 Sam.Chap.6). The next day, 20 Jan, is the feast of Michael the Archangel, Ethiopia’s most popular saint. And it is only on this morning that the Tabot of St. Michael’s is returned to his church, also accompanied by the singing and dancing of priests and locals with their colorful dress. Thus ends the three-day celebration, a unique ceremony of the Ethiopian Orthodox Church, which evolved in relative isolation from the rest of the world. Timkat, truly is the most spectacular of Ethiopia’s festival.]]>