Malaku Bayen (April 29th, 1900-May 4th, 1940) was born in Wollo Province in central Ethiopia.  At six months of age, he was taken by his parents to the city of Harar, where he grew up in the palace of Ras (Grand Duke) Tafari Makonnen, his mother’s first cousin and the future Emperor of Ethiopia (Haile Selassie I). In accordance with the aristocracy’s custom of educating and training likely young boys for positions of leadership, young Malaku was placed under the tutelage of his prominent and powerful relative and taught by priests, attached to Ras Tafari’s palace. During these years, Malaku lived close to the future king, serving as both his page and personal attendant. In 1921, when Tafari was selecting young Ethiopian men and women to be educated abroad, Malaku was among the first to be chosen. Malaku says, “I was told of my responsibility by His Majesty himself; that I was to study medicine and return to Ethiopia as a physician for the purpose of helping to organise the Public Health System”. Bayen was subsequently sent to Bombay, India with three colleagues, two young men and a woman, for preparatory studies under private tutors from Great Britain. Cast in the typical imperialistic mould of Victorian England, these Instructors used to tell us, Bayen later recalled, “of the greatness of the British Empire.” Finally, when his teachers haughtily informed him and his comrades that it was British destiny one day to control Ethiopia, Bayen decided that he had had enough of an English education. After discussing the matter, he and his friends concluded that, America was the only country that would never try to rob us of our country therefore, it would be best to go there. The tiny group thereupon prevailed upon their benefactor, Ras Tafari, to permit them to pursue their studies in the United States, where imperialistic designs on Africa seemed absent. Much to their probable relief and delight, the students’ request was granted. Thus, within the short span of one year they were preparing to travel to yet another far off land. Bayen set sail with two of his colleagues for the United States. (The young woman had died in India.) The three students arrived in America in April 1922, carrying with them a personal letter of introduction to President Warren G. Harding from Ras Tafari, by now heir apparent to the Ethiopian throne. Because of their impressive credentials from the Ethiopian regent, the trio was permitted to meet Mr. Harding, who urged the Africans to enroll at Muskingum College. The Ethiopians accepted the President’s kindly suggestion. Bayen zealously studied his lessons at Muskingum Academy and by attending classes during the regular school year and summers he was able to complete his high school education in 1925. He graduated from that Muskingum College just three years later, becoming one of the first Ethiopian nationals to earn an American degree. The autumn of 1928 he applied and was admitted to the Medical School at Howard University, one of the nation’s most prestigious black educational institutions. Bayen wrote in 1939, “I select Howard University for my studies, in order that I might have a closer contact with my people.” In fact, he continued, “it was this idea that helped me to break my engagement to the daughter of our Minister of Foreign Affairs and to be married to an American girl (Dorothy Hadley) of the Black Race, in 1931.” The source of Bayen’s identification with Afro Americans is not entirely clear, but his convictions may have been partially shaped by his close relationship with Dr. Azaj Workneh Martin, the Ethiopian Emissary in London, a leading Ethiopian physician and staunch advocate of Pan-African-ism. As early as 1927, Dr. Martin had advised Bayen that, “The greatest service you could render your country would be to influence thousands of Black people in the U.S.A. and the West Indies and let them come and help us develop Ethiopia.” In 1930, Bayen took Trinidadian-born Hubert F. Julian, the Harlem aviator, to Ethiopia. A year later he arranged to have Dr. John West, a physician from Washington, D.C., sent to his country to serve there as a public health official. In 1932, Bayen was instrumental in obtaining a position in the Ethiopian school system for Cyril Price, and in 1934 he played a prominent role in assisting John C. Robinson of Chicago to be appointed as an instructor in aviation.

Although many thousands of African Americans had signed up to fight for Ethiopia, only Robinson was able to evade the sanction against Americans fighting against a non-enemy of the US, by securing a business visa to sell airplanes. While in Ethiopia Robinson was recruited by the Emperor to lead his Royal Air Force in 1934 against the imminent fascist attack by Benito Mussolini, Col. Robinson, nick-named the “Brown Condor” stood up when the entire world failed to take action. He valiantly flew dangerous missions to transport men, supplies and the Emperor himself in the face of fierce resistance from Italian fighter pilots. He was eye-witness to the numerous horrendous gas bombings carried out by the Italians on innocent civilians. Constantly chased by the Italian war planes, he often managed to escape into the clouds where Italian pilots were afraid they may run into one of the many tall mountains in Ethiopia. Robinson took enemy fire often and was injured but was never shot down. When Italy’s overwhelming modern forces took Ethiopia’s capital Addis Ababa, Robinson continued his fight in the US spreading the word about the atrocities committed by Italy against Ethiopia. Robinson would later return to Ethiopia after the war to head the rebuilding of the Imperial Ethiopian Air Force and future commercial airlines. He would also later establish the successful American Institute school for elementary and secondary students in Addis Ababa. 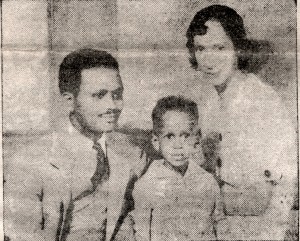