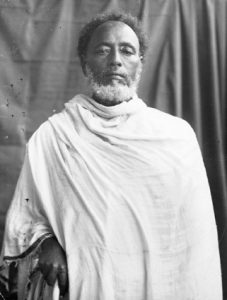 Empress Menen was born in the Wollo province Ambassel Region at ‘Egua’.  The daughter of Asfaw, Jantirar of Ambassel and Woizero Sehin and was baptized in St Delba George Church. Asfaw was a direct descendant of Emperor Lebna Dengel (1532), through Emperor Gelawdewos (1551) of Ethiopia and his daughter Princess Enkulal Gelawdewos. The title of Jantirar has traditionally belonged to the head of the family holding the mountain fortress of Ambassel, and he was one of them. Her mother was Woizero Sehin Mikael, half-sister of Lij Iyasu Emperor of Ethiopia from 1913-16.   Empress Menen, bore a descent from the Prophet Mohamed through her mother, Sehin, daughter of Negus Mikael (Muhammad Ali) of Wollo.  Male descendants of the Prophet are sharifs. The Emperor of Ethiopia at the time of the Prophet Mohammed was Armah who was Christian.  When the early followers of Mohammed were being persecuted in Arabia, they fled across the Red Sea to the Axumite Empire where they asked for sanctuary.  The rulers of Arabia asked Armah to return the refugees, but when he saw that they were mostly women and children, he refused saying that even if the Arabian rulers sent him a mountain of gold he would not hand over these poor people.  Thus Islam has existed in Ethiopia since its very inception.  Mohammed was deeply moved by this act and called Ethiopia and her monarch “righteous” and exempted Ethiopia from Jihad.  When Armah died it is said that Mohammed wept for him.  Thus Ethiopia escaped the conquest of the early Islamic period that swept away the Christian Kingdoms of North Africa Genealogy to the Prophet Mohamed 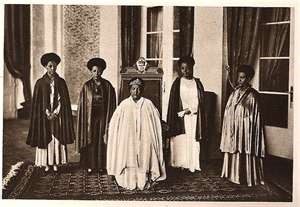 The Early Years Woizero Menen Asfaw was given in marriage by her family, to the prominent Wollo nobleman, Dejazmach Ali of Cherecha, and bore him a daughter, Woizero Belaynesh Ali, and a son, Jantirar Asfaw Ali. This first marriage ended in divorce, and Woizero Menen then married Dejazmach Amede Ali Aba-Deyas, another very prominent nobleman of Wollo. She bore her second husband two children as well, a daughter Woizero Desta Amede, and a son Jantirar Gebregziabiher Amede. Following the sudden death of her second husband, Woizero Menen’s grandfather, Negus Mikael arranged her marriage to Ras Leul Seged Atnaf Seged, a prominent Shewan nobleman, who was considerably older than Woizero Menen, sometime in late 1909 or early 1910. Empress Menen had no children by Ras Leul Seged. In Nov. 5 1910 she started a journey from Dessie and reached Addis Ababa on Nov. 25, 1910. Woizero Menen probably met Dejazmach Tafari Makonnen  (later Emperor Haile Selassie) 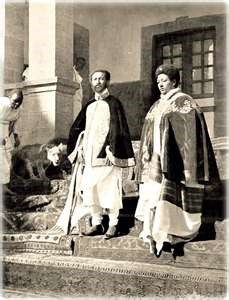 at the home of her uncle, Lij Iyasu. The rapport between the two may have inspired Lij Iyasu to attempt to bind Dejazmach Tafari to him more firmly through marriage ties. He therefore arranged the separation of Woizero Menen from Ras Leul Seged, and sent her to Harar to marry Dejazmatch Tafari Makonnen. They were married in July of 1911. Ras Leul Seged apparently did not hold a grudge against Dejazmatch Tafari for this circumstance, blaming it entirely on Lij Iyasu who had ordered it. He was among the leaders who fought on the side of Dejazmach Tafari Makonnen in the Battle of Segale, and died in that battle. In Oct. 17, 1916 Lij’ Eyasu was over thrown from his authority of ruling the country.  Even though their grand father King  Michale made civil war since he was at the side of his son Lij Eyasu. Princess Menen kept her promise with her husband crown prince Dejazmach Tafari and showed her loyalty helping him up to the end. Lij’ Eyasu was succeeded by Empress Zauditu, who gave Dejazmach Tafari the position of a regent and in 1928 this position was elevated, as she granted him the throne of Shoa, his title was then elevated to Negus, “King”. There was incomplete church started by Empress Taitu which is found in east Addis Ababa around Entoto Tigat. Empress Taitu told to Woizero Menen to complete it. Keeping her promise Empress Menen invested a lot of money and completed the construction of the church in 1922. In March 16 1922 the “Kidane Mihret” church opened for worship. The church became monastery called “Hamere Noh’. Woizero Menen gave her estate to the monastery helped those who give service to the church. This monastery is still a shelter for many Christians. There is holy water near to the church which people immersed in, and drink. People from every corner of Ethiopia give thanks to Empress Menen for this gift. On March 1922 Woizero Menen travelled to Jerusalem to visit the birthplace of Jesus 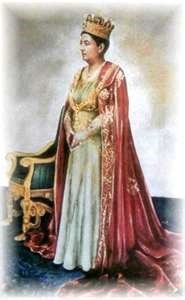