On 4th May 1940, the Ethiopian World Federation lost one of its brightest shining stars, and  founding member, Dr Malaku. E. Bayen to lobar pneumonia. His death came almost four years to the very day of the Italian entrance into Addis Ababa and one year prior to Haile Selassie’s triumphant return to the Ethiopian capital. Of Dr Bayen Haile Selassie in his Autobiography wrote    “In the month of May 1940, we heard of the death, in America, of our loyal servant Dr. Malaku Bayen. When we were told of his death, we mourned him at our residence in Bath. Dr Bayen was our palace servant whom we raised up from childhood. Realizing his diligence and farsightedness, we sent him to be educated in America in 1921, and hardworking as he was, he became a medical doctor. When the Italians invaded Ethiopia, he came to serve his country and his Emperor, and marched to Maychew with us. He had a strong desire to help wounded soldiers and we have heard about the service he rendered operating on them. Dr. Malaku Bayen came to England with us after the war. Them he proceeded to America, where he worked hard to help Ethiopia in any way possible. He did a commendable job of mobilizing and organizing African Americans in supporting Ethiopia’s cause”……………. Haile Selassie I. 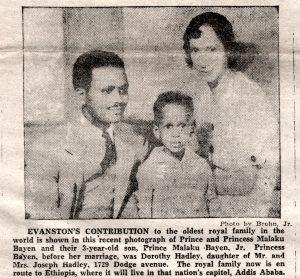 Just as Dr Bayen had succeeded in sustaining interest among black Americans in the plight of Ethiopia, in effect creating a greater understanding between some of his countrymen and Afro-Americans, his life was brought to an abrupt end. With one swift stroke sudden death had not only dispossessed a young woman and her son, of a husband and father but had also as the Voice of Ethiopia eulogized, deprived Ethiopians and Afro- Americans of “one of the most useful and promising of the young leaders of the race.” http://rastaites.com/oldnews/hearticals/ethiopianworldfederation/ewf1.htm http://www.tadias.com/index.php?s=bayen https://rastafari.tv/malaku-e-bayen-ethiopian-emissary-to-black-america/ https://shorefrontjournal.wordpress.com/2013/03/10/dorothy-hadley-an-ethiopian-princess-at-the-birth-of-a-movement/ http://www.ethiomedia.com/1000codes/malaku-bayen-resting-place.html http://www.zehabesha.com/ethiopian-patriot-malaku-bayen-resting-place/]]>