As part of the anniversary observances, the Rastafari Millennium Council and the Coral Gardens Committee and other groups Thursday organised a protest march and motorcade from downtown Kingston to the seat of Parliament at Gordon House and on to Half-Way-Tree for a rally at Mandela Park.

Among other things, organisers hoped to use the protest in Kingston and related observances in Montego Bay to raise consciousness of the events and press their case for an apology by the Jamaican Government for actions perpetrated by agents of the State. They were also seeking some form of financial compensation for Rasta elders still said to be suffering consequences of Coral Gardens and subsequent events. “Murder was the political mission,” read one of the placards highlighting the Coral Gardens incident, which was seen by Rastafarians as an orchestrated attempt to get rid of the movement. The march and motorcade, organised by the Rastafari Community in partnership with Irie FM Radio, began shortly after noon in front of the Ward Theatre, downtown Kingston, after brief opening remarks by Mutabaruka who reminded the large gathering that atrocities of the state against the citizens were not limited to Rastafarians 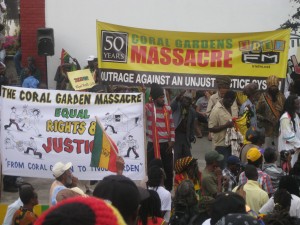 Led by an Irie FM ‘Shockwave’ outside broadcast unit, the procession attracted numerous curious onlookers from all walks of life, along the way. It first circled St William Grant Park then proceeded up Duke Street in the direction of Gordon House, home of the parliament.

In a sudden change of plans, the flag-waving, placard-bearing marchers, did not stop at Gordon House to carry out a 30-minute silent protest as previously scheduled. Instead, they marched 100 metres up Duke Street and stopped in front of the Bustamante Industrial Trade Union (BITU) head offices, near to the King Solomon’s Temple and beside the Moravian Church of the Redeemer, for this protest,said to be a first for the Rastafari community. 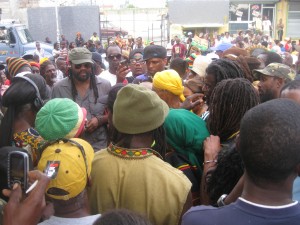 Rasta elders explained why the location was chosen for the protest. Late Ethiopian Emperor Haile Selassie I, who is at the centre of the Rastafari faith, traces his dynasty to King Solomon and beyond, and the following quote in relation to what Rastafarians dubbed the “Coral Gardens Masscare”, is often attributed to Bustamante: “If jail cannot hold the Rastafarians, put them in Bogue Hill Cemetery.”

After the silent protest, the next stop was the National Heroes Circle, where the motorcade gained momentum and continued into the Nelson Mandela Park in Half-Way-Tree where the day’s event came to a climax with a rally and outside broadcast of Mutabaruka’s Thursday’s afternoon Irie FM show called The Stepping Razor. The show on this occasion was co-hosted by his colleague of the same station, Andrea Williams. Their guests included Carol Narcisse, and attorneys-at-law Michael Lorne and Bert Samuels

“Fifty years ago we couldn’t a talk ’bout Rastafari open dem way yah. Police woulda pack we up, throw us inna jeep, trim we. Today we have dem a lead us inna motorcade,” amused Empress Esther, one of the many speakers at the Rally.

Click Here to read about the history surrounding Coral Gardens…..
]]>