eadership of the non-violent civil rights movement in the United States. He was assassinated at the Lorraine Motel in Memphis, Tennessee on April 4, 1968, at the age of 39. A Baptist minister, King became a civil rights activist early in his career. He led the 1955 Montgomery Bus Boycott and helped found the Southern Christian Leadership Conference (SCLC) in 1957, serving as its first president. King’s efforts led to the 1963 March on Washington, where King delivered his “I Have a Dream” speech. There, he expanded American values to include the vision of a color blind society, and established his reputation as one of the greatest orators in American history.

The shooting by James Earl Ray happen in Memphis, where King had come to support striking garbage collectors. James Earl Ray, a fugitive from the Missouri State Penitentiary, was arrested in London at Heathrow Airport, extradited to the United States, and charged with the crime. On March 10, Famous Quotes of Dr Martin Luther King Jr 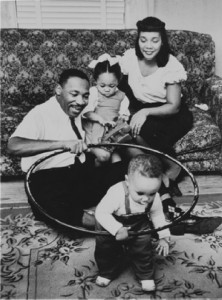 “A nation that continues year after year to spend more money on military defence than on programmes of social uplift is approaching spiritual death.” “The limitation of riots, moral questions aside, is that they cannot win and their participants know it. Hence, rioting is not revolutionary but reactionary because it invites defeat. It involves an emotional catharsis, but it must be followed by a sense of futility.” “Non-violence is the answer to the crucial political and moral questions of our time: the need for man to overcome oppression and violence without resorting to oppression and violence. Man must evolve for all human conflict a method which rejects revenge, aggression and retaliation. The foundation of such a method is love.” “Man was born into barbarism when killing his fellow man was a normal condition of existence. He became endowed with a conscience. And he has now reached the day when violence towards another human being must become as abhorrent as eating another’s flesh.” 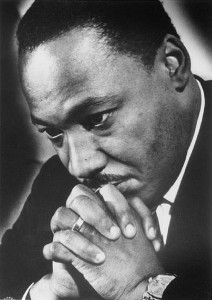 “The curse of poverty has no justification in our age. The time has come for us to civilise ourselves by the total, direct and immediate abolition of poverty.” “It is necessary to understand that Black Power is a cry of disappointment. The Black Power slogan did not spring full grown from the head of some philosophical Zeus. It was born from the wounds of despair and disappointment. It is a cry of daily hurt and persistent pain.” “Discrimination is a hell-hound that gnaws at Negroes in every waking moment of their lives to remind them that the lie of their inferiority is accepted as truth in the society dominating them.” “When we ask Negroes to abide by the law, let us also declare that the white man does not abide by law in the ghettos. Day in and day out, he violates welfare laws to deprive the poor of their meagre allotments; he flagrantly violates building codes and regulations; his police make a mockery of law; he violates laws on equal employment and education and the provisions of civil services. The slums are the handiwork of a vicious system of the white society; Negroes live in them, but they do not make them, any more than a prisoner makes a prison.” 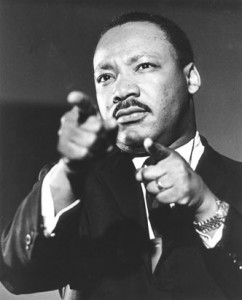 “It may be true that the law cannot make a man love me, but it can keep him from lynching me, and I think that’s pretty important.” “Darkness cannot drive out darkness; only light can do that. Hate cannot drive out hate; only love can do that. Hate multiplies hate, violence multiplies violence and toughness multiplies toughness in a descending spiral of destruction. The chain reaction of evil………must be broken, or we shall be plunged into the dark abyss of annihilation.” “Like an unchecked cancer, hate corrodes the personality and eats away its vital unity. Hate destroys a man’s sense of values and his objectivity. It causes him to describe the beautiful as ugly and the ugly as beautiful, and to confuse the true with the false and the false with the true.” “We must combine the toughness of the serpent and the softness of the dove, a tough mind and a tender heart.” “To be a Negro in America is to hope against hope.” “Power at its best is love implementing the demands of justice. Justice at its best is love correcting that stands against love.” “Many of the ugly pages of American history have been obscured and forgotten…….America owes a debt of justice which it has only begun to pay. If it loses the will to finish or slackens in its determination, history will recall its crimes and the country that would be great will lack the most indispensable element of greatness – justice.” “Man is man because he is free to operate within a framework of his destiny. He is free to deliberate, to make decisions, and to choose between alternatives. He is distinguished from animals by his freedom to do evil or to do good and to walk the high road of beauty or tread the low road of ugly degeneracy.” “A good many observers have remarked that if equality could come at once, the Negro would not be ready for it. I submit that the white American is even more unprepared.” 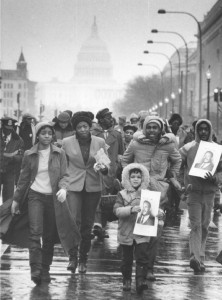 “If a man hasn’t discovered something that he will die for, he isn’t fit to live.” “Non-violent action, the Negro saw, was the way to supplement, not replace, the progress of change. It was the way to divest himself of passivity without arraying himself in vindictive force.” “Our lives begin to end the day we become silent about things that matter.” “In the end, we will remember not the words of our enemies, but the silence of our friends.” “I have decided to stick with love. Hate is too great a burden to bear.”  ]]>