Telegrams from Emperor Haile Selassie I

From the original Voice of Ethiopia A Message from the Emperor: In reply to Father Blackett’s telegram to his Imperial Majesty for His birthday in Bath, England the following telegram was received after the meeting of the Celebration Emperor Haile Selassie Birthday Celebration Committee. “For father Blackett, Please convey to your committee our deep appreciation to their kind message of good wishes.” Emperor Haile Selassie I END_OF_DOCUMENT_TOKEN_TO_BE_REPLACED

Greeting & Blessed Love Biruk Fiqir. I give Thanks & Praise to Greet each and everyone in the Name of His & Her Imperial Majesty Emperor Haile Selassie 1st & Empress Wiozero Menen I For Iver. On 28th November 2008 in Bronx New York at the Sundial Health Facility where the International Council met in person and by conference call, I, Deborah E Walters (Local No. 13) was a Witness to this Historical Meeting where 9 of 10 Officers met to carry out their duties, the first time since the Officers returned forward from Ethiopia for Annual Convention of The EWF Inc. The Officers have challenges up ahead to overcome with the Grace of Higher Levels seen & unseen, Blessings be bestowed upon them in this Journey. The Meeting forward straight and very Harmonious to the Points. Lots of plans are to be announced by the Council to the Locals. END_OF_DOCUMENT_TOKEN_TO_BE_REPLACED

On the 18th December 2008, the International President and the First Vice President met with Attorney Kiesha N. Brooks in New York to discuss the state of the Ethiopian World Federation Inc. It was agreed that Ms Brooks would be retained for the purposes of liaising with the Internal Revenue Service, the New York State Department (Division of Corporation) and the New York State Charities Bureau. The organisation will need to budget for legal fees in respect of the retention of Ms Brooks. END_OF_DOCUMENT_TOKEN_TO_BE_REPLACED

From the Office of the International Organiser I arrived at Montego Bay airport 18.15 on November 29th 2008 to be received by the International President and International Chaplain and resided at an address identified by the Chaplain for the remainder of the visit. We met with 19 members of the Montego Bay Local No. 32 and approximately the same number at the St Ann’s/Ochi Rios Local No. 17 also Bro Seaton along with Bro Gad (NY) representing Kingston Local No. 43.

Issues of procedure were discussed such as balloting, also lack of communication, previously the inability of delegates to travel to Conventions due to visa restrictions in the USA and Europe.

Also discussed were problems with registration as a Jamaican Limited company causing taxes to be levied. We discussed the land grant model city concept, complaints about monies previously sent to New York which, were unaccounted for and which has led to some members refusing to pay dues because of constant breakdowns in New York. END_OF_DOCUMENT_TOKEN_TO_BE_REPLACED 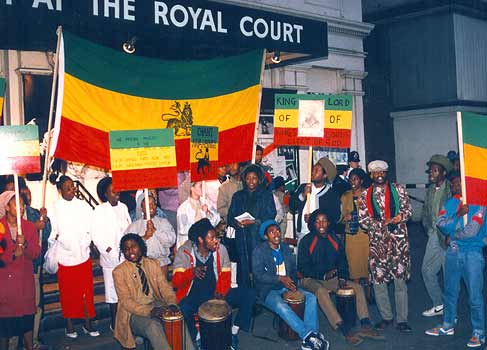 Is the Ethiopian World Federation, Incorporated relevant today? That is what one of my brethren asked me recently, of course I replied, it is more relevant today than ever before I believe! It is an organization of seventy one (71) years and what I see is an institution that was created by His Imperial Majesty Emperor Haile Selassie I specifically to help Ethiopia during the Italio-Ethiopian war and its best the brothers and sisters today participate in organizations such as the Nyahbinghi House, the Twelve tribes of Israel, the Bobo Shanties, the Millennium Council, the JRDC, and any of the other groups or organizations that have been formed over the past years he argued. I had to remind him that “a people without a knowledge of the their history is like a tree without roots” that is to say that many of the brothers and sisters today are caught up in the cult of personality and have not really engaged in a deep study of their recent history from the beginning of the 20th century. END_OF_DOCUMENT_TOKEN_TO_BE_REPLACED

Greetings and salutations to all members of The Ethiopian World Federation Incorporated. As we as black people find ourselves depending solely upon the almighty for guidance and protection from all hurt, harm or danger, firstly we must look within, before we look without. Many of the problems that we suffer; are simply because we have not taken note from our past and therefore the future looks very bleak, because we refuse to look at the present and take charge of our actions and deeds.

Let us use the next three to four weeks before our local elections to pay close attention to all details of our constitution and bylaws. We need to set a better example for the future generations.

We are facing the same crossroads now as we have for many decades, only now there are fewer solutions than before. We really need to be able to depend on each other for simple responsibility and accountability for we all say and do. END_OF_DOCUMENT_TOKEN_TO_BE_REPLACED
« Older Entries